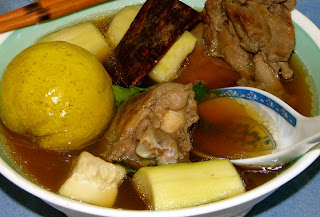 This recipe is from "Thai Food by David Thompson" a book on the people, culture and cuisuine of Thailand that was 10 years in the making.
A paragraph in the introduction:
"Thai cooking is at odds with the modern world, where speed and simplicity are paramount. Thai is not an instant cuisine, prepared with the flick of a knife and finished with the toss of a pan. It needs the cook's attention, it expects time and effort to be spent and it requires honed skills, but it rewards with sensational tastes."

Chop each of the duck legs into three pieces. If using a whole duck, remove the legs and do the same then cut down the bottom of the rib cage and remove the back bone. Chop the breast in half lengthwise and then cut diagonally into three. Marinate duck in the kecap manis and ground star anise for about 5 minutes.

Deep fry duck until dark brown, to enrich the soup; don't worry if it looks burnt - it's just the kecap manis caramelizing. Drain. (The deep frying is optional, but it helps to prevent the duck looking too anaemic in the finished soup.) Line a large, deep bowl with cabbage leaves and add the duck, gourd, whole pickled lime, cassia and orange peel. Cover with boiling stock and season with soy sauce, oyster sauce and sugar. Cover tightly with foil and steam for 2-3 hours, checking the water level in the steamer at regular intervals. Serve sprinkled with pepper and coriander.